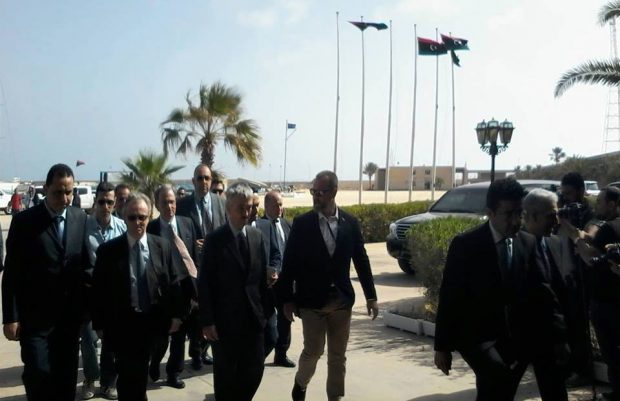 Western countries continue to show their support to the UN-backed Government of National Accord (GNA) to take over the reins of Libya and the ambassadors of Britain, France and Spain arrived in Tripoli on Thursday part of this support.

They met with officials of the government at its naval base and matters discussed focused on security, GNA’s priorities as Libya’s unity government and the kind of assistance that could be provided by their respective countries.

Since Ambassadors Peter Millet of Britain, Antoine Sivan of France and Spanish ambassador Jose Antonio left Libya in 2014 due to the heavy fighting in the capital, yesterday’s visit marked their first return to the country.

Their visit came a couple of days after Italian Foreign Minister, Paolo Gentiloni, arrived in the country at the beginning of the week to meet with the GNA. He had then stated that “we are all studying and discussing the possibility of reopening our diplomatic presence in Tripoli” as he hoped other countries will follow suit in “the near future.”

Insecurity continues to be a major threat to the livelihood in Libya and the Secretary General of NATO Jens Stoltenberg said they have offered to help the GNA builds its capacity, defense institutions, disarm militia groups and possibly training programs but stressed that “we are not planning for a ‘combat’ mission.” He admitted that the situation in Libya is “very difficult and dangerous” and the presence of the Islamic State militants is increasing.

Stoltenberg said they are in direct contact with the Libyan government and are ready to help but they have not received a request from the GNA. He added that the UN-backed government knows of the “capabilities” of NATO as he declined to speculate on the arrival of a request from Tripoli.