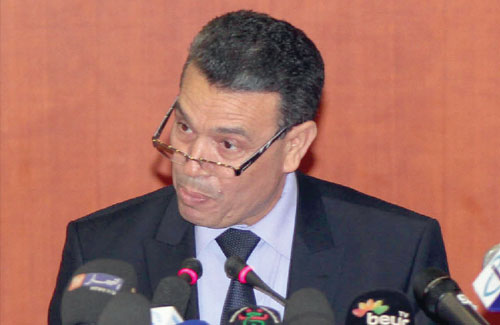 Some OPEC and non-OPEC members are reluctant to freeze their production at the January 2016 levels, although such a move will allow the oil market to recover gradually, said Algerian Energy Minister Salah Khebri Monday on the sidelines of a meeting on fuel oils.

The meeting between OPEC and non-OPEC members to be held in Qatar on Sunday is “crucial” because “it will allow the oil market to recover gradually” if an agreement is reached, he said, admitting however that reaching such an agreement will be challenging because there are countries still unwilling to freeze their production.

He said a freeze will increase global oil prices since the mere announcement of the meeting led to a gradual increase of prices to above $40.

According to the Algerian official, prices might stabilize at around $40 if the freeze is implemented.

He acknowledged that there are both OPEC and non-OPEC members that “don’t want to cut their output… especially Russia” as he pointed out that “each country has its concerns and reasons.”

Khebri said the meeting will seek to reach “a consensus that suits everyone.”

Algeria is heavily dependent on gas and oil exportation and the low global prices has heavily affected the finances of the state and forced the government to review its development projects. The finance minister on Monday announced the issuing on April 17 of a National Bond for Economic Growth designed to mobilize “available and saved resources” to finance the country’s investment and economic projects.

Henry Bussery, general manager of Alstom Algeria, said the company (developing and marketing systems, equipment and services for the railway sector) has been affected by the low oil prices because “some of the projects that are in our business plan are frozen” after the government reduced its order by 35%.

Expanding the railway network from 3,000km to 12,5000km used to be a major project for the state before the crisis.