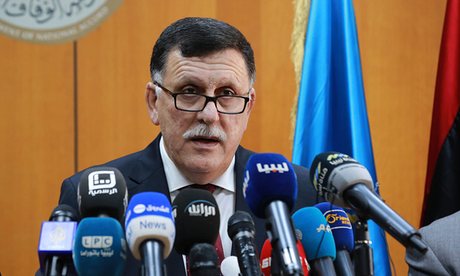 Late Tuesday, the Tripoli-based justice ministry posted a statement citing that the National Salvation Government (NSG) and its related institutions were stopping work in “the interests of the nation” and to avoid bloodshed, division and fragmentation.

Special envoy Kobler said they “know of (NSG) ministers who are willing to hand over.” The statement was indirectly refuted by Prime Minster Khalifa Ghweil on his website on Wednesday. A statement posted on the website stressed that “given the requirements of public interest ….you (government officials and employees) are requested to continue your mission in accordance with the law.”

The two released contradictory statements hint that the NSG is divided over its role in the country in relation to the UN-backed Government of National Accord (GNA) that arrived in the country last week. Signs of division were eminent on Tuesday when members of the General National Congress (GNC,) the Tripoli-based parliament, held two different sessions on Tuesday; one at the Radisson Blu Hotel and the other at headquarters of the parliament.

The Radisson Blu Hotel session was described by lawmakers in attendance as “the final session of the GNC.” It was led by GNC’s second deputy speaker Saleh al-Makhzoum and chaired by Abdulrahman al-Shater. They unanimously voted to amend the constitutional declaration and the UN-backed Libya Political Agreement reached in December.

Other members of the GNC who met at the body’s headquarters claimed that “a session with a full quorum” rejected the session which took place at the Radisson Blu Hotel and all the matters that it voted on.

Amid the growing tension between authorities in Tripoli, the statement from Ghweil signaled that “the choice of the new government is a purely internal national affair in which no one has the right to interfere.”