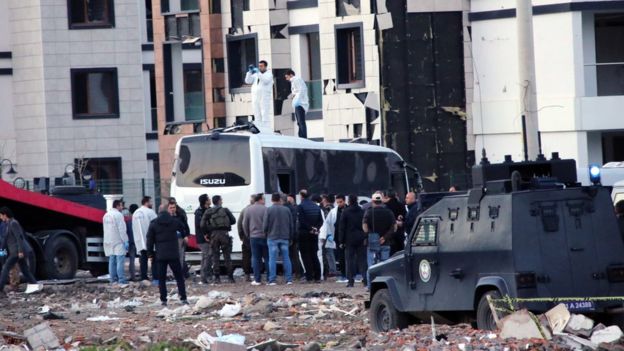 President Recep Tayyip Erdogan has called on Western allies, mainly the United States, to review their policy towards the Kurds that Washington is supporting in Syria in the fight against the Islamic State group.

President Erdogan who is participating in Washington in the Nuclear Security Summit, hosted by President Obama, made the remarks after the Thursday bombing in Kurdish-dominated city of Diyarbakir which killed seven police agents and wounded scores of people.

Erdogan who blamed the PKK for the attacks said “We cannot tolerate this anymore. European countries and other countries, I hope, will see the true face of the PKK and other terrorist organisations in these attacks.”

Ties between Turkey and the US headed downward recently with the US bringing support to Syrian Kurdish Democratic Union Party (PYD) and its militia People’s Protection Units (YPG) in the fight against IS. Ankara sees both bodies as PKK affiliates.

Things got worst after the PYD announced it was establishing its autonomous region along Turkey’s Syria border, something Ankara fears may galvanize home PKK to also move in the same direction.

Turkish Presidential spokesman Ibrahim Kalın traveling with Erdogan, said at the end of a meeting Thursday between the Turkish leader and US Vice-President Joe Biden that the US was determined to keep Syria in one piece and was opposed to the PYD’s declaration of federation.

According to Turkish media, the spokesman said Biden had pledged to increase anti-PKK cooperation with Turkey.