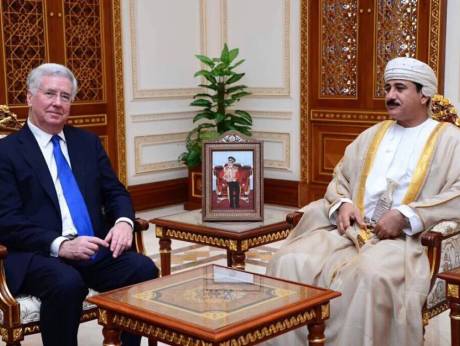 British Defense Minister Michael Fallon said there are plans to have a permanent naval force stationed in Oman and a Memorandum of Understanding was signed between UK’s Babcock International Group and Oman Drydock Company to build the base near Duqm port, at an estimated cost of around $110 million.

The minister claimed it is an investment “in the future security and prosperity of Oman.”

Fallon said the base will make the presence of British troops permanent and would help to establish “a permanent training hub” to be also used as a repair and maintenance facility. He stated that Oman is an important ally because “it can be a source of stability in the troubled region.”

Oman is known for its impartiality in regional crises and has usually served as a deal broker between states in the region.

Oman “occupies a key strategic position in the region” and the UK is “committed to helping the country in case of any threat,” he said adding that the permanent base would further facilitate such actions. He also wants stronger naval and air force ties between the two countries as training exercises between their militaries have been limited to the land. The UK is interested in having a general defense cooperation which goes beyond selling weapons.

The defense minister was speaking at a press conference held at the residence of the UK ambassador in Muscat where he had met several senior Omani officials.