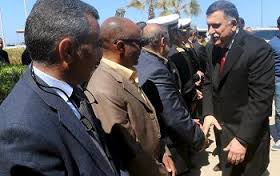 The Prime Minister-designate of the UN-backed Government of National Accord (GNA) Fayez Serraj together with six deputies arrived in Tripoli on Wednesday onboard a ship coming from Tunisia.

Western countries quickly declared their support to this government and UN special envoy Martin Kobler hailed the move, while the two rival Libyan governments renewed their opposition to the GNA soon after its arrival.

The announcement of Serraj’s arrival was received with mixed feelings as fears of a new round of hostilities emerge with gunshots heard around the capital. The Al-Naaba television channel was attacked and taken off air. GNA stated on its website that the officials will be using the Libyan ship that brought them as a temporary seat of power.

Serraj called on rival politicians to “turn the page of the past” because “revenge, alienation, antipathy, and hatred don’t build a state” as he promised “rapid measures” to lessen the suffering of Libyans. He said all laws will be compliant with Shariah.

Kobler highlighted Serraj’s “exceptional personal courage” and called for an “immediate orderly and peaceful handover of power.” He stressed that all Libyan “security actors” are responsible for the safety and security of the presidency council and the GNA.

However, Prime Minister Ghwell of the Tripoli-based government described the GNA as “a deformed newborn” and its members as “infiltrators.” He said “either they hand themselves in or leave” while his foreign minister Ali Abu Zakouk said Serraj’s presence is “unacceptable.”

The Tobruk-based government led by Prime Minister Thinni is also against the GNA’s arrival. Spokesman Fathi al-Mrimi said the move is “premature” stressing that “they have entered by force under foreign protection, and Libyans won’t accept anything imposed on them by force.”