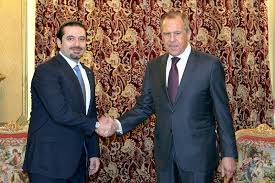 The leader of the Future Movement party and once prime minister of Lebanon, Saad Hariri, met with Russian Foreign Minister Sergei Lavrov to discuss the situation in Lebanon and other regional matters of common interest.

During the meeting in Moscow, Hariri told Lavrov that “we appreciate the important role that Russia is playing in the region” but lamented that the “meddling” of foreign actors into regional affairs especially in Lebanon “is preventing the election of a head of state.”

Lebanon has been without a president since May 2014 and there is no likelihood of the political parties reaching an agreement any time soon as they are divided between two camps and none of them has enough parliamentary votes to win an outright majority to elect a president.

Lavrov said Russia is interested in “preserving the Lebanese community and state institutions” by continuously cooperating with Lebanese political groups including those that are not in the cabinet. He underlined the “unconditioned respect” of the country’s sovereignty, territorial integrity and independence while noting that the Middle East continues to be a region that is “too complicated.”

Lavrov, who expressed his country’s keenness to safeguard Lebanon, called on rival Lebanese leaders to maintain the country’s best interest away from foreign interference.

Future Movement MP Atef Majdalani said the visit is “part of Hariri’s flurry of regional and international activity aimed at serving the interests of Lebanon and the Lebanese as well as protecting Lebanon from the repercussions of regional conflicts, namely the war in Syria.”

Interfax news agency quoted Hariri saying that “Lebanon is ready to cooperate with Russia militarily and [on] various other matters.” On Syria, he added that President Assad “cannot be part of a final solution.”