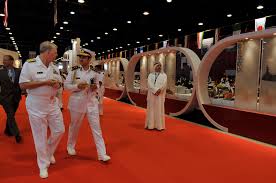 British defense secretary Michael Fallon and US Embassy’s Chargé d’Affaires Ryna Gilha in Qatar have both hailed the Gulf State as a key partner and ally in the Middle East for their respective countries.

The two officials who were attending the opening of the 5th edition of the Doha International Maritime Defense Exhibition and Conference (Dimdex) applauded their countries’ military ties with the Gulf State and their share in Qatar’s security and defense trade market.

Fallon said Doha is an important strategic partner for Britain in all fields especially in military and defense as he underlined that their security and defense relations are strong and growing. He explained that his visit translates the determination of the British government to work with Qatar and its other allies to promote and maintain stability and security in the Gulf and Europe.

The two countries are cooperating on organizing the 2022 FIFA World Cup in Qatar according to Secretary Fallon and a defense cooperation agreement was signed last week for closer coordination on military training and exercises until 2026.

US Embassy’s Charge d’Affaires Ryna Gilha described Qatar as one of the strongest allies of the US and stated that trade and investment relations between the two countries continue to develop with increasing demands for US goods and services.

Some 17 US companies are participating at the exhibition and Gilha hopes that the demand will increase as she noted that the US defense and security market was awarded more than $10 billion worth of deals by Doha in 2014. Qatar imported $4.3 billion worth of goods from the US last year mostly related to aircraft, transportation and heavy equipment.