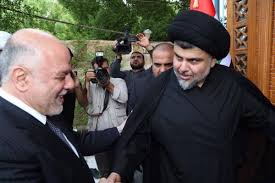 Muqtada al-Sadr, an Iraqi influential Shia cleric, who had initiated a protest at the gates of the Green Zone in Baghdad to request a cabinet reshuffle and the establishment of a government of technocrats met with Iraqi Prime Minister Haider al-Abadi on Sunday night.

Before entering the premises of the Green Zone where he met with Abadi, al-Sadr told protesters that he will enter and sit inside the area and urged his supporters to stay behind before walking past a security checkpoint to sit in a tent. Details of their meeting are yet to be made public. He referred to the Green Zone as the “bastion” of corruption.

The Shia cleric said he is “a representative of the people” as his supporters were reportedly erecting tents and laying their mattresses as they waited for him outside.

The protest that has been going on for weeks has raised questions about the limit of the prime minister’s authority over security forces because the march is “unauthorized” but they failed to disperse or stop the crowd marching towards the Green Zone.

Abadi had stated that there are plans for a cabinet reshuffle this week but didn’t state if he will be appointing technocrats. Most Iraqis have criticized the government of mismanagement and al-Sadr wants economic and political reforms to be enacted.