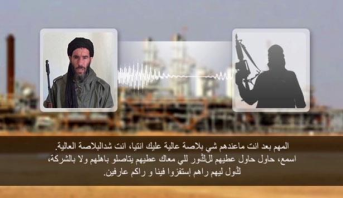 Rumors about coordinated moves and secret agreements passed by Algerian Authorities with terror groups providing for sparing Algeria from terrorist attacks have circulated for years.

However, contents of phone talks of some terrorists have clearly confirmed the existence of such contacts.

The phone conversations were aired on Wednesday evening by Medi1 TV channel. The talks dating back to January 17, 2013 during the hostage crisis in Ain Amenas gas plant in Algeria took place between the terrorists holding the hostages and their leaders. These talks clearly show that there was coordination between Algerian army officers and Mokhtar Belmokhtar.

The phone talks broadcast during “60 minutes pour comprendre” talk show highlight the involvement of the Algerian army in the hostage taking operation wherein 40 employees from ten different nationalities had been killed in addition to 29 terrorists.

The contents of the talks confirm revelations made this March 16 by Wikileaks which published thousands of confidential e-mails received by Hillary Clinton, the former US Secretary of State.

One of these e-mails addressed to the then secretary of State by her long-time friend and former aide to her husband, Sidney Blumenthal, reveals secret agreements between the Algerian power and the terrorist Belmokhtar, also known for smuggling cigarettes and supplying arms to the underground network from Niger and Mali, as well as for kidnapping Westerners.

According to the e-mail, the Algerian government and security officials were not concerned about the fate of the hostages, but wanted to end the siege on the plant at any cost, was it the life of innocent workers.

They were fearing that the January 17 operation might mark a resumption of the 20 year civil war and resolved to deal with the situation “with extreme force.”

“The fate of the hostages is a secondary consideration in this decision,” sources quoted in the e-mail said.

The leaked e-mail shows that contacts between the Algerian intelligence services and Belmokhtar during the hostage crisis were not incidental but were part of a previous secret agreement dating back to April 2012. Under this agreement, Belmokhtar was urged to focus his operations in Mali and also on Morocco.

The e-mail states further that in the opinion of this source, Belmohktar’s forces, have existing contingency plans to launch attacks in Western Sahara and against Western interests throughout the Maghreb.

Another e-mail from Sidney Blumenthal dated January 19, 2013 says that a source “with access to the highest levels of the Algerian army” said that the Algerian government planned to meet again Belmokhtar after the Ain Amenas attacks.

“According to this sensitive source, officers of the Algerian DGSE are working to meet in secret with Belmokhtar or one of his lieutenants in northern Mauritania in the immediate future. They have been ordered to establish the reason why Belmokhtar violated their two-year old secret agreement, and launched attacks inside of Algeria.”