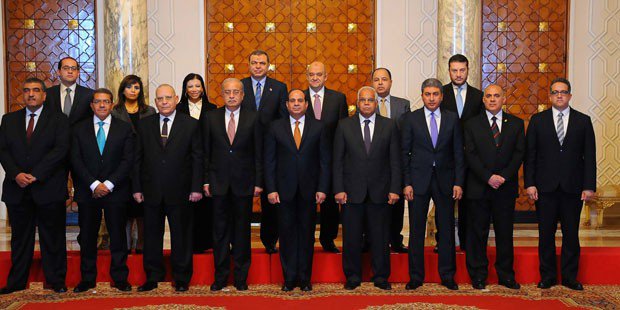 The Arab world’s most populous state has struggled to spur economic growth since the 2011 uprising ushered in political instability that scared off tourists and foreign investors, key sources of foreign currency.

Amr el-Garhy and Dalia Khorshid are expected to pilot the country’s economy which grew by a mere 4.2 percent in the fiscal year 2014 / 2015. This year budget projects a 5 percent growth for the financial year ending in June.

Mohamed Hossam Abdelrehim, who served as Egypt’s top judge in 2014-15, was appointed justice minister, when the key defense, interior, and foreign ministers all kept their portfolios as did holders of economic portfolios such as the planning and supplies ministers.

After years of publicly lionizing Sisi as the savior of the nation, many Egyptian influential figures have started blaming the president for the ailing economy, the Islamist insurgency raging in the Sinai Peninsula, and the brutality of the police force which has not been reformed.