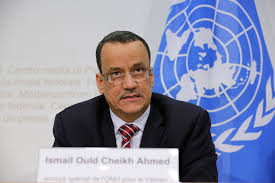 A ceasefire is expected to be implemented in Yemen on April 10 ahead of the peace talks scheduled to take place on April 18 in Kuwait with the UN special envoy Ismail Ould Cheikh Ahmed saying that “this is really our last chance”.

“The war in Yemen must be brought to an end,” the Special Envoy said expressing hope that the upcoming talks would contribute positively to ending the war.

The UN Security Council also called on the warring parties to “immediately reduce violence and refrain from any action that could lead to increased tensions, in order to pave the way for a cessation of hostilities.” The last ceasefire was violated several times with both sides holding each other responsible.

The Saudi-led coalition will be marking the one year anniversary of its intervention in Yemen on Saturday. The coalition intervened in Yemen to reinstate Hadi as the legitimate president.

Special Envoy Ismail said Riyadh is “fully committed to make sure that the next talks take place and particularly supports us with regard to the cessation of hostilities.”

The U.N special envoy to the country is hoping that a “comprehensive agreement” would be reached in Kuwait in order to pave the way for an “inclusive political dialogue.”