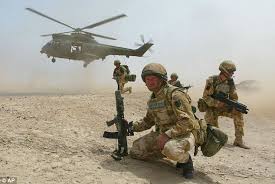 The war in Iraq against the Islamic State could be taking a new turn after the death of a US marine in a rocket attack by the extremist group on a small outpost near Mahmour, South of Mosul, and the Pentagon’s decision to dispatch the 26th Marine Expeditionary Unit (MEU) to Iraq.

The Pentagon announced on Sunday it was deploying the 26th Marine Expeditionary Unit (MEU) to Iraq after “consultation” with Baghdad. The unit is an air-ground fighting force of 2200 soldiers but the released statement did not mention the number that would be sent to Iraq and the role it would play.

Analysts believe that the soldiers will be active on the frontline signaling a change in the Obama administration’s ‘No boots on the ground’ policy. There are around 3,600 US army personnel in Iraq but their activities are limited to airstrikes on the Islamic State, providing intelligence and logistics to Iraqi and Kurdish forces on the ground.

The last known US intervention on the ground against ISIS dates back to October 2015 when Special Forces raided a safe house together with other militia groups and liberated 70 hostages. A US sergeant was killed during the operation.

More ground operations are likely to follow. In January, US Defense Secretary Ash Carter stated clearly that “there will be boots on the ground” while Lieutenant General Sean MacFarland, top-ranking US general in Iraq, echoed similar statements last month saying they are preparing for “combined arms operations” with Iraqi forces to provide “a decisive advantage over a static enemy dug in behind complex obstacle belts.”