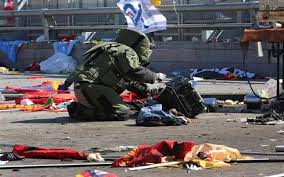 Turkey’s Interior Minister Efkan Ala said the bomb attack in Istanbul’s central Istiklal Avenue that left three Israelis, two of whom had American citizenship, and an Iranian dead was carried out by Mehmet Ozturk whom it linked to ISIS.

The Saturday bomb attack in one of the busiest streets came only six days after another bomb attack killed at least 35 people in Ankara.

Prime Minister Erdogan said the Kurdish Workers’ Party (PKK) and ISIS are being used by “other powers” as pawns with ambitions over Turkey. “We will spoil the game of those who are trying to manage Turkey through terrorism,” he said without naming any country.

Yet, Turkey had repeatedly accused Syria and Russia of supporting the PKK that it considers as a terrorist group and expressed disapproval with the US for providing logistics to Kurdish militia groups fighting ISIS.

The latest attacks have raised concerns about public safety and the capabilities of security and intelligence forces to prevent attacks especially ahead of Monday’s celebrations of the Kurdish New Year.

The Interior Minister pointed out that “regardless of the precautions you take, sometimes there are these suicide-bombing-type attacks that you cannot prevent; this is a nuisance that all countries have.”

Israel has issued a travel warning to its citizens against travelling to Turkey and Prime Minister Netanyahu wants investigations to determine if Israeli citizens were deliberately targeted. Eleven of the 36 wounded in the attack were Israelis.

Since the beginning of the year, there have been four separate bomb attacks that have left more than 100 people dead. Ankara claimed that it is increasingly being attacked because of its cooperation with the US-led coalition against ISIS. The citizens are showing solidarity against the attacks with the slogan “We’re here and we’re not afraid.”