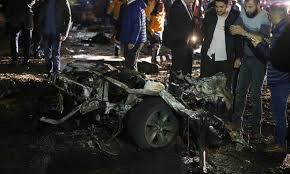 A bomb attack on Sunday at a bus station near Guven Park in Ankara killed at least 37people and left more than 125 injured. Prime Minister Davutoglu postponed his scheduled Tuesday visit to Jordan after the “heinous attack” and promised that Turkey will continue its fight against terror “with determination” before warning that “the treacherous powers” targeting the country will be punished severely.

No group has claimed responsibility for the attack but security officials said there is evidence that one of the bombers was a female who joined the Kurdistan Workers Party (PKK) in 2013. She is reported to be from the eastern city of Kars and born in 1992. The government has not officially held any group responsible but claims that it has concrete information of those behind the attack.

Meanwhile, several suspected militants of the PKK have been rounded up in the south eastern town of Sirnak and a 24hour curfew has been declared. South eastern Turkey’s population is dominated by Kurds and the region has been devastated by Ankara’s fight against PKK.

Shortly after the attack, state news agency reported military airstrikes targeting the PKK in northern Iraq but did not state if it was in reaction to the blast. Nine F-16s and two F-4 jets raided 18 alleged positions of the group including the Qandil Mountains where the group’s leadership is based.

Aso Talabani, Iraqi Kurdistan regional government representative in Moscow, claimed that civilians are suffering the most from the Turkish airstrikes and there is a lot of collateral damage. He told RIA Novosti that Turkey would not hesitate to bomb a house full of civilians just to kill a PKK militant.