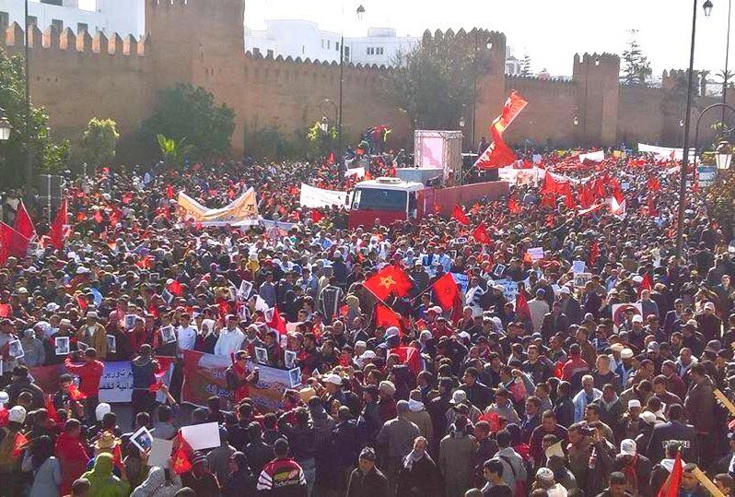 Moroccans from all over the country gathered in capital city Rabat on Sunday March 13 for a march to reaffirm their attachment to their Sahara and reiterate that the Sahara is Moroccan and will remain Moroccan.

The march was staged at the initiative of political parties, trade unions and civil society NGOs in response to the statements made by the UN Secretary General Ban Ki-moon during his visit last week in the Tindouf camps and in Algiers, statements decried as biased and provocative by the Moroccan Government, Parliament and people.

Over three million Moroccans came to Rabat to participate in the protest march and express their shock and dismay at Ban Ki-moon’s statements where he spoke of the Sahara as “an occupied” territory and referred to the obsolete “self-determination referendum” option that was deemed by UN senior officials as unrealistic and unworkable. He should have rather talked about the Morocco-proposed autonomy plan considered by the Security Council and the international community as a credible and serious basis for a political solution to the Sahara issue.

In response to Ban’s remarks, the Moroccan Government issued a strong statement denouncing these remarks as being “politically incorrect,” “outrageous” and as “hurting the feelings of the whole Moroccan people.”

The Government also blamed the UN Chief for his failure to adopt a neutral position and for having “violated the commitments and guarantees given to Morocco,” pointing out that Ban’s comments are unprecedented and against the resolutions of the Security Council.

On the eve of the Rabat march, the two chambers of the Moroccan Parliament held an extraordinary session and issued a joint statement condemning the provocative and biased stance of the UN Secretary General, and decrying his statements as a “blatant breach” of the principle of impartiality that a UN Secretary General needs to observe imperatively.
For Moroccan MPs, “this deliberate breach” by the Secretary General aims at covering his own failure to make any tangible progress towards the settlement of the Sahara issue.

Morocco’s allies and friends also deplored Ban Ki-Moon’s blunder. At a meeting held on Wednesday in Riyadh, the Foreign Ministers of the Gulf Cooperation Council (GCC) and of Jordan threw their support behind Morocco and hailed its autonomy plan as a laudable and ambitious initiative seeking to end the conflict.

France renewed its unchanged stance on the Sahara conflict and said that the issue “is the subject of a UN mediation that France supports within the parameters set by the Security Council.”

According to Moroccan al Massae daily, the United States also considered the comments of the UN Secretary General, who should “stick to the obligation of neutrality in the conflict” as “a call to aggravate the security situation in the region.

According to these sources, Washington “categorically rejects” Ban Ki-moon’s statements as contrary to the role assigned to him as a facilitator of dialogue between the conflicting parties.

The United States supports the resolutions of the Security Council, the only body empowered to rule on the dispute over the Sahara, stated Al Massae, adding that Washington has reportedly said that “the Security Council will remain true to the initial choice, namely the search for a fair solution accepted by the parties to the conflict.” For the daily, Washington has thus distanced itself from the UN Chief’s biased statements.

The popular mobilization for the Sunday historic march and the support voiced by Morocco’s allies reminded Moroccans of the epic of the 1975 Green March which enabled Morocco to peacefully retrieve its southern provinces that were under Spanish dominion.