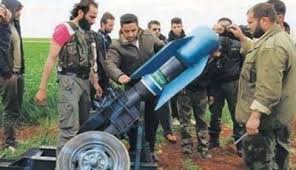 Militants of the Islamic State group fighting in Iraq fired rockets loaded with mustard gas on Bashir and Taza Khurmatu on Tuesday and Wednesday.

The chemical rockets triggered widespread anger among the civilian population who blocked the road between Kirkuk and Baghdad in protest demanding that the government carry out airstrikes.

The contents of the rockets are yet to be officially confirmed but a senior security official said “the gas was a light silver color and sometimes left some liquid where it landed.”

Meanwhile, US warplanes struck targets in Mosul suspected to be storing chemical weapons. The mission is believed to have been initiated after Sulayman Dawud al-Bakkar, alias Abu Dawud, was captured last month. Pentagon’s spokesman Peter Cook said he is the “emir of chemical and traditional weapons manufacturing” and had provided the US with valuable information about the group’s chemical activities and individuals involved. Abu Dawud also revealed chemical weapons facilities.

Cook said the interrogations “resulted in multiple coalition airstrikes that have disrupted and degraded ISIL’s ability to produce chemical weapons and will continue to inform our operations in the future.”

Substances such as phenyltrichlorosilane, classified by the U.N as a corrosive substance to human flesh and metal, and Polyolefins Polybond were found in a warehouse used by the extremist militants in Ramadi. The warehouse was not far from other warehouses in an industrial area.