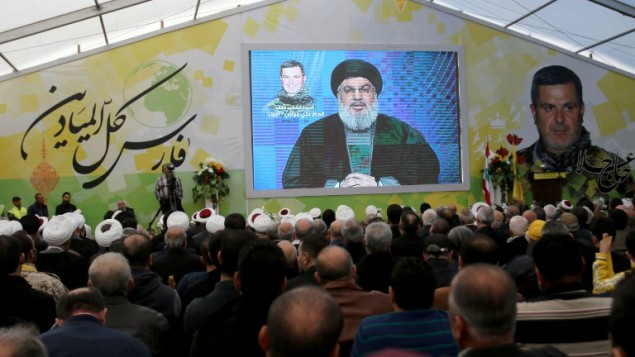 Leader of the Lebanon-based Shiite organization Hezbollah, Hassan Nasrallah, Sunday took aim at Sunni Arab countries and Israel to whom he vowed defeat after Sunni Gulf States blacklisted his organization as a terrorist organization.

Speaking at an event commemorating the martyrdom of a senior Hezbollah commander, Ali Fayyad, Nasrallah hailed some Arab leaders who refused to align on Saudi Arabia-led condemnation of Hezbollah as a terrorist group and accused Israel of trying to divide the Arab world.

Last week, Gulf Cooperation Council (GCC) blacklisted Hezbollah as terrorist group because it was recruiting young people of the Gulf and sending them to the battle field in Yemen, Syria and Iraq.

Nasrallah also laid into Gulf States which he said did nothing for Lebanon and Palestine pointing out that it was his movement which drove out Israel from South Lebanon.

Referring to Saudi Arabia’s decision to rescind its military assistance to Lebanon worth $3 billion, Hassan Nasrallah said “We do not need your weapons; leave us alone.”

In his speech aired on Hezbollah media outlet al-Manar, Nasrallah also denied receiving orders from Shiite-dominated Iran which is reportedly sponsoring the Shiite movement in Lebanon.