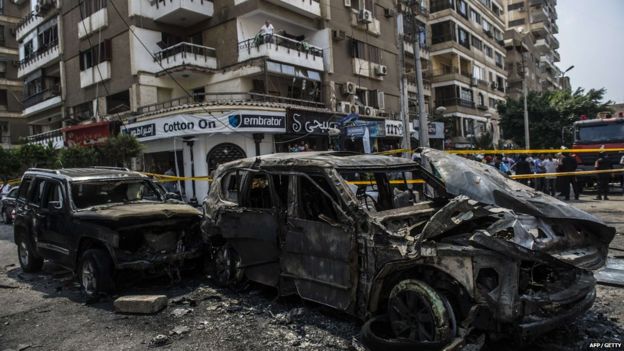 “This plot was carried out on the orders of the Muslim Brotherhood … in close coordination with Hamas, which played a very important role in the assassination of the chief prosecutor from start to finish,” Interior Minister Magdy Abdel Ghaffar told reporters at a press conference.

Ghaffar indicated that Turkey-based Muslim Brotherhood movement collided with the Hamas movement in the Gaza strip which provided the training and the explosives for the attack.

“This is a very big conspiracy that started a long time ago,” he said.

Al-Sisi moved on to outlaw the Muslim Brotherhood movement which has been blacklisted as “terrorist” group. Most senior officials of the movement fled the country while hundreds of others including Morsi have been arrested and handed down lengthy jail sentences in controversial trials criticized by human rights groups and leaders around the world.

Muslim Brotherhood and Hamas have both denied any involvement in the killing of Barakat.

The Interior Minister revealed that 48 Muslim Brotherhood members have been arrested in connection with the assassination while fourteen of them have confessed to the killing of the country’s top prosecutor.

Egypt has been facing insurgency since al-Sisi’s military coup against the Muslim Brotherhood backed President Mohamed Morsi. Attacks against military and security forces have occurred repeatedly in the country’s Sinai Peninsula where militants affiliated to IS built a nerve center.

Authorities have claimed that anti-government attacks have killed more than 500 soldiers and security forces. President al-Sisi who vowed to wipe out insurgency following the death of Barakat recently indicated that militant attacks only occur in the Sinai, which represents one per cent of the country’s territory.