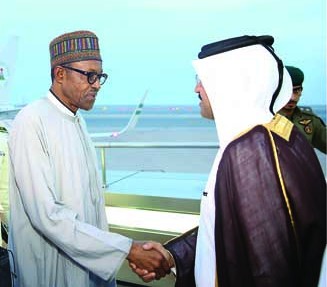 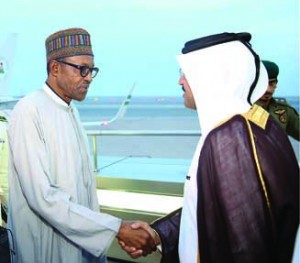 Nigeria’ Muhammadu Buhari called for cooperation between oil producing countries, both OPEC and non-OPEC members, to stabilize the prices of oil in the global market.

In a statement released by the Nigerian presidency Sunday, after a meeting between President Buhari who was on a visit to Qatar and his host Shiekh Tamim in Doha, the visiting president told the Qatari ruler that “the current market situation in the oil industry is unsustainable and totally unacceptable.”

“Cooperation both within and outside our respective organizations to find a common ground to stabilize the market” should be encouraged, the Nigerian President insisted.

During Buhari’s visit, Nigeria and Qatar signed two agreements to “boost economic cooperation” through fighting tax evasion and avoiding double taxation and to establish direct flights between major cities of both countries.

Nigeria is not the only country feeling the effects of oil prices collapse. Qatar is also struggling to align its finances by cutting more than 7% from its 2016 budget as it faces its first budget deficit in almost 15 years. Qatar’s trade balance slipped by 58% according to a report published by the Development Planning and Statistics Ministry with “oil-gas and other gaseous hydrocarbons” having their value of exports decreased. It has led to Qatar losing a total of $2.7billion between January 2015 and 2016.

Gulf States, led by Saudi Arabia, have a key role in OPEC and in his discussion with King Salman of Saudi Arabia last week; Buhari urged for cooperation to boost oil prices. 90% of Nigeria’s foreign exchange earnings come from the exportation of crude oil.