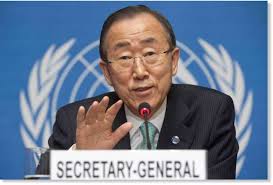 UN Secretary General Ban Ki-moon warned that “escalated military activity by several parties” and threats of the use of force “risk derailing efforts to find a sustainable political solution” in Syria.

In a report to the Security Council on the implementation of the December resolution for a peace process in Syria, Ban Ki-moon stressed that successful negotiations also depend on the “genuine, committed and sustained backing” of the International Syria Support Group.

World powers agreed to stop hostilities in Syria by Friday following an agreement in Munich last week but efforts are not fruitful as fighting continues with Turkey getting more involved with its shelling of Kurdish forces from its border.

German Chancellor Angela Merkel proposed a no-fly zone to end the increasing tension along the Syrian-Turkish border. Damascus reacted to her calls on Thursday with a Foreign Ministry spokesman saying the German Chancellor is interfering in its domestic affairs and sovereignty and contradicting international law and the UN Charter.

The spokesman said Merkel’s statement does not contribute to ending the crisis and also “coincides with the demands of the Turkish authorities, which are aimed at protecting terrorist groups and feeding crimes of extremists against the Syrian people.”

Mr. Ban said “the Syrian parties and their supporters can continue to pursue the bankrupt logic of a military victory” which would continue worsening “the greatest humanitarian crisis of our time” and create safe havens for terror groups. He said those who committed war crimes must be held responsible for their actions.

Meanwhile, the US asked Russia to avoid certain areas in Syria in order to maintain a level of safety for US ground forces training local forces to fight IS militants.