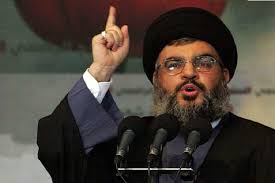 Hezbollah’s Secretary General Hassan Nasrallah accused Saudi Arabia and Turkey of trying to undertake actions contrary to peace in Syria as President Assad and his allies have put the warn-torn country on a “new track.”

In a speech marking the organization’s Martyr Leader’s Day Tuesday, Nasrallah alleged that Riyadh and Ankara are acting out of “hatred” and are trying to end Assad’s rule. Instead of focusing on fighting the Islamic State, they want to “gain a foothold” in Syria, he said.

Nasrallah was speaking from an undisclosed location and his message was relayed to supporters through a video link. He claimed that the armed groups backed by Saudi Arabia and Turkey “did not deliver” and the recent actions of the two governments are due to the “disappointments” they experienced in Syria.

Ankara has been shelling Kurdish forces for the past four days while Riyadh has sent warplanes to a Turkish airbase after stating that it was ready to deploy ground forces in Syria.

Nasrallah said through their plans to send ground troops into Syria, Saudis and Turks seek to “be present at the negotiations table or continue the war” before adding that “Turkey has suffered the fall of its ‘new Ottoman empire scheme’”.

Fighting is taking place less than 25 km away from the Turkish border.

Syria and Russia have already warned against ground intervention of foreign troops in Syria because it would prolong the war and Nasrallah expressed a similar opinion. Hezbollah supports Assad and has fighters in Syria.

“Those who are operating in Syria without the authority of the sovereign government in Syria are violating international law,” he told a news conference at the European Parliament in Brussels.

Zarif admitted Iran has military advisers in Syria supporting the Assad Regime but added that they were there at the request of the Syrian president.