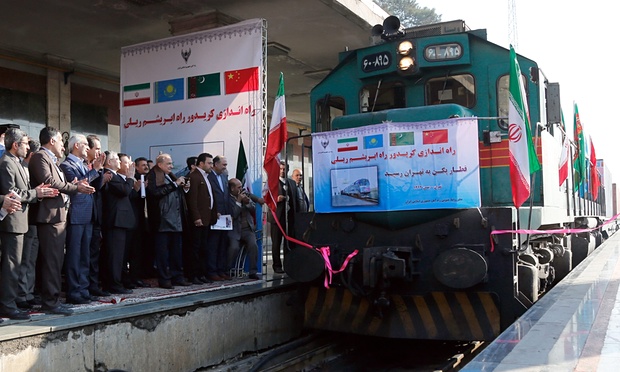 The first cargo train coming from China arrived on Monday in Tehran marking the revival of the ‘Silk Road Economic Belt’ project spearheaded by Beijing with Iran expected to play a major role due to its geographic location.

The train covered the 10,399 kilometer journey passing through Kazakhstan and Turkmenistan in 14 days, prompting Mohsen Pour Seyed Aghaei, Iran’s deputy minister for transport, roads and urban development and president of the Iranian railways, to hail its speed which is expected to increase as countries develop their railways. Chinese and Turkmenistan ambassadors were at the station to welcome the train.

The train arrived with 32 cargoes each with a capacity of a 40 square foot container. It’s more than 50% faster than the sea route as “the travel time of the train was 30 days shorter” than ships take between the ports of China’s Shanghai city to Iran’s Bandar Abbas port city, Aghaei stated.

Tehran will allocate an investment of $6billion over the next six years to the Silk Road Initiative and Aghaei said “after the inauguration of the freight railroad from China to Europe, more goods will be conveyed through Iran to European countries” which will bolster “transit revenue.” Iran shares territorial borders with 15 countries and has sea openings on its northern and southwestern coasts. It is expected to be used as a hub under the initiative.

Chinese ambassador to Iran, Pang Sen, said the Silk ‘Belt and Road’ economic initiative unveiled in 2013 will boost construction projects and provide efficient cargo trade transportation. According to Iranian media, more than a third of Iran’s foreign trade is with China, which is Tehran’s top customer for oil exports.