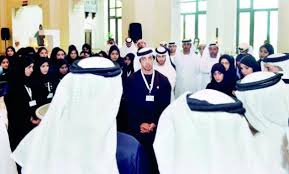 Vice-President and Prime Minister of the UAE Sheikh Mohammed bin Rashid Al Maktoum announced Monday the creation of a Ministry of Happiness that will be tasked with channeling “policies and plans to achieve a happier society” and a Ministry of State for Tolerance that would “instill tolerance as a fundamental value” in the society.

Sheikh Mohammed, who is the Ruler of Dubai, also announced that some government services will be privatized to mark the “beginning of a new journey of achievements and giving to the people” saying that “governments must be flexible.”

The announcements were made in a series of tweets on Monday but there was no timeframe for the implementation of the restructuring. Sheikh Mohammed said “we don’t need more ministries but more ministers capable of dealing with change.”

He said “the new government will have a smaller number of ministries and more ministers to deal with national and strategic issues.”

The Ministries will be restructured and their roles will evolve. Some will have at least two ministers of state. The Prime Minister explained that they need “a government whose essence is human and family, education and aspirations to build their future” as well as a “virtuous society” with “educated generations and equal economic opportunities for all.”

“A young and flexible government” that Sheikh Mohammed aspires for would lead to the appointment of a female minister of state for Youth who will be no older than 22 according to the UAE-based daily The National. A Youth National Council composed only of young people would also be established to advise the government on youth issues.

The announcement was made after the approval of the UAE President and Ruler of Abu Dhabi Khalifa bin Zayed Al Nahyan.