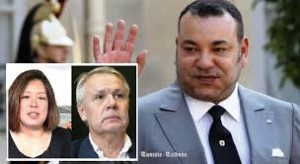 The pleas submitted by two French journalists, Eric Laurent and Catherine Graciet, who made the headlines last summer for their involvement in an extortion and blackmail attempt against Morocco, were rejected by a French Court of appeal.

The investigation chamber of the Paris Court of Appeal rejected Tuesday the request submitted by the defendants’ lawyers to consider inadmissible the audio and video recordings showing the two journalists demanding €3 million to Morocco’s attorney, Hicham Naciri, to abandon their scheme to publish a controversial book on the North African country and its King Mohammed VI.

Attorney Naciri held three meetings with the two journalists to discuss the details of the deal and recorded all the conversations. The third and last meeting in a Paris restaurant in August last year was the most compromising as it was supervised by French police. During this meeting, the two journalists signed a document pledging that they will never ever write on Morocco and received €40,000 each as an advance pending the finalization of the arrangement.

As they were leaving the restaurant with the evidence of their foul play in their pockets, the two journalists were arrested by the police and referred to court.

Now that their pleas to consider inadmissible the audio and video recordings have been rejected, the journalists will find it hard to exculpate themselves with such a documented evidence.