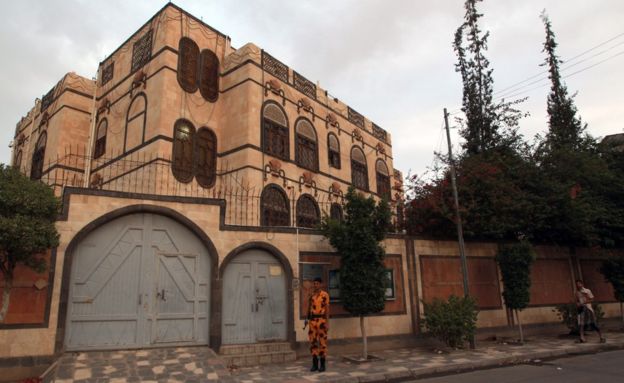 Iran has accused the Saudi-led coalition of damaging its embassy building in Yemen and injuring at least one of its staff after an airstrike landed near the building but the claims have refuted by the spokesman of the coalition, Brigadier General Asseri. Some countries have moved their embassy to Aden after the government took over it but Tehran continues to maintain its own in Sana’a where coalition airstrikes have intensified recently. Asseri said some of the abandoned embassies are being used by the Houthis.
According to Iran’s foreign ministry spokesman, Hossein Jaber Ansari, “Saudi Arabia is responsible” for the “deliberate action” that had damaged the embassy building and injuring some of its staff. He termed it as a “violation of all international conventions that protect diplomatic missions.”
The accusations by Tehran were considered as “false” by the Saudi-led coalition because “no operations were carried out around the embassy or near to it.” The released statement added that there have been confirmations that “the embassy building is safe and has not been damaged.” Similar claims were also made by residents near the area. Asseri said Houthis provided the information being used by Iran to claim the bombing of its embassy. He stressed that the information has “no credibility.”
Iran’s deputy foreign minister Hossein Amir Abdollahian later on stated that the airstrike “fell near our embassy” causing serious damage to one of the guards and vowed that “details” of the attack will presented to the U.N Security Council.
Meanwhile, as tensions between Tehran and Riyadh continue to rise, Saudi’s defense minister Prince Mohammad bin Salman in an interview with The Economist published on Wednesday said a war between the two countries is out of the equation.