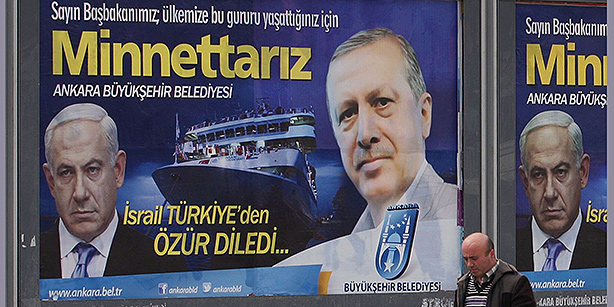 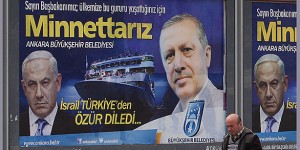 Turkish President Recep Tayyip Erdoğan over the week-end told Turkish journalists that both Turkey and Israeli need each other following diplomatic efforts by the two countries to ease tension caused by Israel’s attack on a Turkish humanitarian ship bound for Gaza in 2010 and Tel Aviv’s blockade on the Gaza strip.
“Israel needs a country like Turkey in the region. We need to accept that we also need Israel. This is a reality in the region,” Erdoğan was quoted by Turkish newspaper on Saturday as saying.
Diplomatic ties between the countries eroded away after an Israeli raid on the Gaza-bound Mavi Marmara aid ship in 2010 left 8 Turkish and one US citizen killed plus Turkey’s demand for lifting of Israeli blockade on the Ankara-supported Hamas-ruled Palestinian territory of Gaza.
Turkey also sought apology by Israeli authorities for the raid as well as demand for compensations to the victims’ families.
Erdogan also told reporters that Israeli has presented its apologies and that the payment of the compensation is on due course. He added that Israel has agreed to allow Turkish goods and construction material into the Palestinian territory. However he warned that Ankara is still waiting to a written agreement.
“Normalization will come if we manage to take these steps with mutual sincerity. We need to look out for our Palestinian brothers,” Erdoğan said.
Analysts savvy of the Turkish foreign policy argue that the change of heart by Ankara comes as Turkey finds itself isolated in the region following the fall-out with Russia in the wake of the downing of Russian fighter jet at the Syrian border. Russia has adopted strong measures including economic sanctions against Turkey to protest against Ankara’s move.
Turkish former ambassador to Iraq Osman Korutürk told reporters that Ankara’s sudden rapprochement with Israeli could be interpreted as desperation and weakness. He also added that fall-out with Russia further pushes Turkey to reconcile with the west and the US.
Another Turkish veteran diplomat, Ünal Çeviköz also indicated that Turkey’s diplomatic U-turn towards Israel has been obvious given that the two countries are unprecedentedly isolated in the region adding that Turkey also needs to repair its image in the region.
“Both countries are isolated in the Middle East,” Çeviköz told Turkish Today’s Zaman.
“Turkey is trying to straighten the image it has created over the past few years of a country that has shifted its axis,” he added.