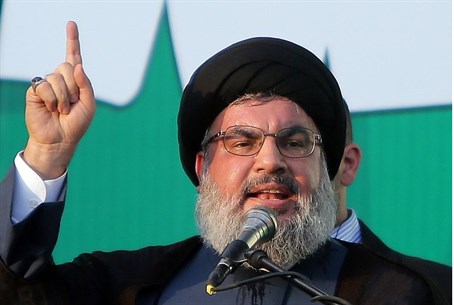 A week after Hezbollah’s commander Samir Kuntar was killed in airstrike in Syria, Secretary General Hassan Nasrallah issued a warning in a televised message during the weekend assuring Israel that “the response for the assassination of al-Kuntar is coming, there’s no doubt.” The Lebanese-based group holds the Jewish State responsible for the attack but it has not been claimed by officials in Tel Aviv although they welcomed it. Nasrallah also accused Israel of trying to legitimize its occupation of the Golan Heights territory that it seized during the 1967 Six-Day War.
Secretary General Nasrallah warned that “the Israelis have a reason to be worried, in the border area and outside it” because they will be targeted in “retaliation” of Kuntar’s murder in what could be uncoordinated attacks as he stated that it is “now up to the resistance fighters.” His comments coincided with the surfacing of al-Baghdadi’s audio message warning Israel that they would meet with the militants of the Islamic State group in Palestine while Israeli Defense Force (IDF) Chief of General Staff Lieutenant-General Gadi Eizenkot also announced the formation of “the IDF Commando Brigade” that will serve as “a front line protector and a marker of the IDF’s abilities and spirit.”
Nasrallah claimed that Prime Minister Netanyahu together with “the American leadership and Western governments” are trying “to obtain international recognition of Israel’s annexation of the Golan Heights under the excuse of the Syrian conflict.” He vowed that “the Israeli entity would be wiped out” if efforts invested in regional conflicts and other conflicts were directed towards the Jewish state.
Eizenkot said Israel is experiencing a sensitive period as “boastful statements” emanate from Hezbollah and threats from ISIS.