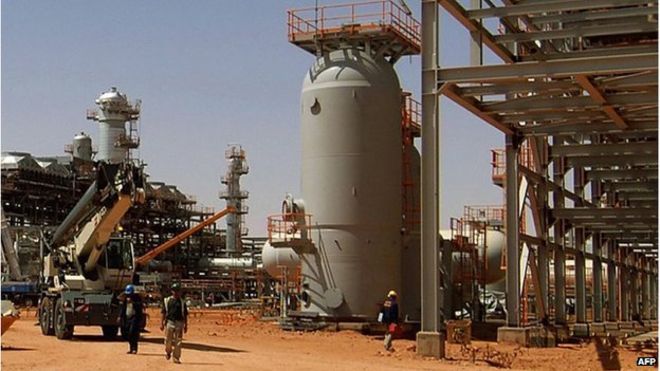 Japanese newspaper “Nikkan-Gendai” has published shocking revelations on the 2013 In Amenas terrorist attack in Algeria, accusing Algerian forces of shooting hostages, while government reports had said the hostages were killed by terrorists in revenge operation.
The In Amenas gas plant in Algeria was operated by BP as part of a joint venture with the Norwegian firm Statoil and the Algerian state company Sonatrach. On 16 January 2013, al-Qaeda-linked militants attacked it. A four-day siege ensued which saw over 800 hostages taken and 40 foreign nationals killed. The foreigners killed were from the United States, United Kingdom, Norway, Philippines, Malaysia, Japan…
The Japanese victims, who fell in the hostage-taking operation, worked for JGC, a Japanese engineering firm. Now, secret audio recordings obtained by a Japanese newspaper show the Algerian Special Forces were aware they were targeting a bus carrying hostages.
According to audio intercepts, the Algerian forces opened fire killing dozens of captives despite promise not to interfere with the terrorists and calls from foreign governments to safeguard the innocents.
The verified audio also quotes a terrorist complaining that “the army has violated the pledge (…) struck the vehicles carrying the hostages and our friends”.
The Japanese newspaper shows what happened behind the scenes after Belmokhtar’s senior commander Abdul al Nigeri carried out the initial raid and demanded the release of terrorists held in Algerian prisons.
The intervention of Algerian forces ended in bloodbath. Forty foreign workers, who were taken hostage by Islamist militants linked to Al Qaeda at a gas plant in Southern Algerian city of In Amenas, were killed during a military operation launched by the Algerian Special Forces.
The identified slain hostages are from the United States, Britain, France, Japan, Norway and Philippines. Thirty kidnappers were also killed during the assault, while three Islamist militants were captured alive.
Algerian authorities had said the captives were killed by terrorists, but the new audio recordings unveiled by the Japanese daily suggest the contrary, challenging the Algerian official version of events.
Some 790 workers were on the site — including 134 foreigners of 26 nationalities — when the extremist gunmen stormed and seized the gas facility. After taking over, the well-armed militants had planted explosives throughout the complex.
The Algerian government said it authorised the assault after four days of standoff amidst fears that the militants might flee to neighboring Mali with hostages after blowing the gas installations.