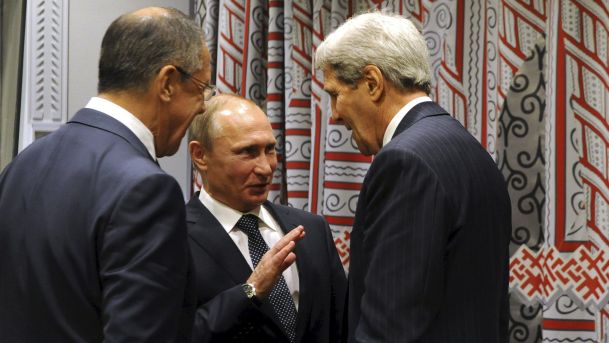 After five years of war in Syria, it seems like Washington and Moscow are narrowing their differences as they eye a possible ceasefire to pave the way for a political transition. President Putin of Russia together with his foreign minister Sergei Lavrov held a meeting with U.S Secretary of State John Kerry in Moscow and there are positive prospects after Lavrov stated that “despite our countries’ differences, we have demonstrated that when the United States and Russia pull together in the same direction, progress can be made.”
There were fears that Russia would veto a U.N Security Council resolution draft to be proposed by the international group supporting the Syrian opposition whose ministers will meet on Friday for the third round of talks but Kerry stated after the meeting that a Security Council resolution would be passed to support “negotiations and hopefully a ceasefire.”
Kerry added that they have reached “some common ground today in agreement with respect to the complexity of this issue of terrorist groups” after Russian foreign ministry urged Washington to review its policy of “dividing terrorists into good and bad ones.” Both sides agreed that the Islamic State group and al-Nusra Front are terrorist groups.
Assad’s role was vaguely addressed by Kerry as he stated that “the US and our partners are not seeking so-called regime change as it is known in Syria” but rather “don’t believe that Assad himself has the ability to be able to lead the future Syria.”
Putin described the talks as “extensive” while Lavrov said they were “substantive” as both countries take the same direction with Kerry convinced that “the world is better off when Russia and the United States find common ground and the ability to work together.”