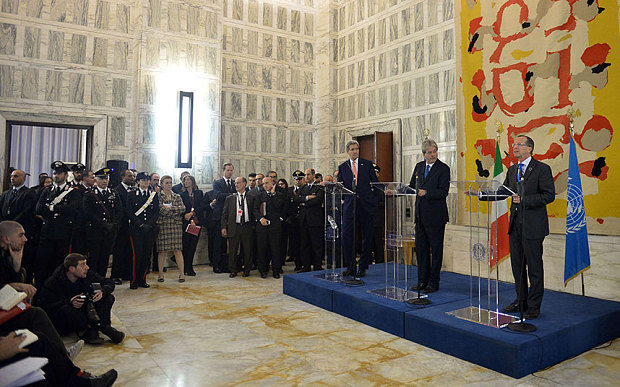 Ministers and government officials of 18 countries together with the representatives of the U.N, E.U and the Arab League met in Rome to discuss Libya urging for the establishment of a transitional unity government to end the war as well as avoid ISIS to strongly implant itself if the chaos continues. The meeting co-chaired by Prime Minister Gentiloni of Italy and U.S Secretary of State John Kerry ended with a released joint statement but some Libyan delegates wonder if it will be followed by practical actions.
Gentiloni said the message is clear and “what matters is the stabilization of Libya because this too can contribute to the fight against terrorism” while Kerry said at the end of the talks that the meeting was organized because “we cannot allow the status quo to continue” stressing that “we refuse to stand by and watch a vacuum filled by terrorists” in reference to the presence of extremist militants. He said “it is dangerous for the viability of Libya, dangerous for Libyans and, because of Daesh (ISIL) migrating there, dangerous for everyone.”
A released statement at the end of the meeting said the participants “stand ready to support the implementation of the political agreement” that is expected to be signed on Wednesday and provide “full political backing and technical, economic, security and counter-terrorism assistance, as requested” by the Government of National Accord. It also called for an immediate ceasefire from Sunday onwards promising to cut off contacts with factions that do not sign the deal.
15 officials from the different Libyan groups were at the gathering and Reuters quoted a member of the Tripoli-based General National Congress opining that “the U.N.-brokered political agreement will die just like the Rome conference will after today.”