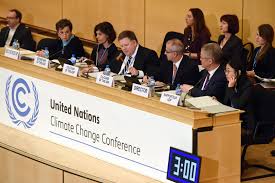 After the meeting in Vienna of the Oil Producing Exporting Countries (OPEC) held last week ended with member countries deciding not to reduce output leading to a further drop of oil prices to around $43 a barrel, Saudi Arabia which is the world’s leading oil producer is among the countries being criticized at the ongoing Paris Climate Change Conference for objecting to several key initiatives at the summit due to its dependency on oil.
Egypt’s Environment minister Khaled Fahmy, also serving as the chair of the African Ministerial Conference on the Environment (AMCEN), was quoted by Sputinknews stating that “Saudi Arabia has such position for their own reasons.” Riyadh is against plans such as financing the needs of the most vulnerable nations or ageing to the prevention of global warming exceeding 1.5°C as scientist warn that 2°C could be disastrous to the Earth. Fahmy said Riyadh is planning to diversify its oil-dependent economy and “they need time” because immediate restrictions or that based on short notice if taken at the climate summit would affect the country.
Riyadh has spent around $100 billion of its foreign reserves due to low oil prices and the trend is likely to continue because countries like Russia, Iraq and Iran are planning to increase production which will further increase the global supply thereby contributing to the fall of prices beyond its current seven-year low.
Some oil producing countries have been complaining about the effects of the low prices but none is willing to reduce its production for fears of losing its market share. Saudi, a major supplier of the market, is planning to issue an international market bond to fuel its market share strategy.