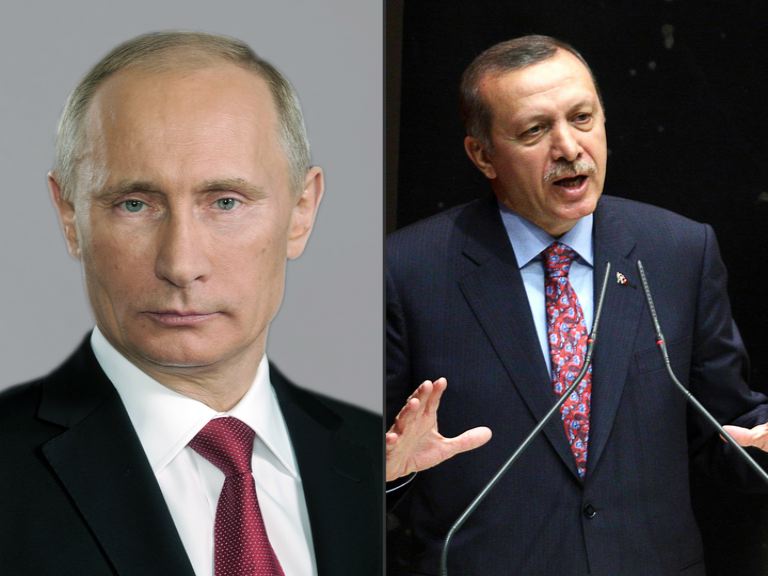 The international community and the U.N are calling for de-escalation of tensions after Turkey downed a Russian jet with both sides providing different stories.

Ankara claimed that a Russian Su-24 Fencer bomber violated its airspace and ignored 10 warnings within a space of 5 minutes while Moscow argues that the Turkish F-16 bombed its aircraft 1kilometre inside Syrian territory and that it didn’t pose a threat to Turkey’s security.

Turkmen rebels killed one of the Russian pilots as he was parachuting to the ground while the other is claimed to have been rescued by Syrian troops. A Russian rescue helicopter also crashed killing one.

President Vladimir Putin stressed that the tragic event is “a stab in the back, carried out by the accomplices of terrorists” while Russian Prime Minister Dmitry Medvedev said “the recklessness of the Turkish authorities’ criminal actions” will endanger relations between Russia and NATO.

He also said that the attack shows that Turkey is protecting ISIL for cheap oil supplies and undermine the long friendly relations between the two countries.

He did not rule out “immediate consequences” in important joint projects and loss of positions in the Russian market for Turkish companies.

Putin already stated that there will be “serious consequences for Russia-Turkish relations.”

Turkey has claimed over the past weeks that its airspace is regularly violated by Russian aircrafts. Its complaints intensified during the weekend after Russian airstrikes targeted Turkmen rebels in Syria near the Turkish border and Prime Minister Davutoglu said earlier in the week that Ankara will embark on diplomatic and military measures to protect “our siblings … in the face of any threat.”

The Turkmen are Syrian nationals of Turkish origin. NATO has shown solidarity to Turkey and defends that it has the right to protect its territory and airspace.

A military confrontation between the NATO member and Russia is feared especially after President Putin on Wednesday ordered the deployment of air defense missile systems at a Russian air base in Syria, located just about 50 km south of the border with Turkey.

If Russia attacks a Turkish plane, NATO would be required to intervene.