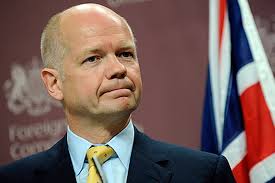 Former British Foreign Secretary William Hague Tuesday admitted UK’s intervention in Iraq was a mistake but said that the ascension of IS demands military presence in Syria to eliminate the group to guarantee peace around the world, heed the calls of innocent people and prevent another Rwanda.

He also proposed the partition of Syria and Iraq to end inter-ethnic conflicts.

Hague stressed the need for Syria, Iraq and other Arab states to combat the terrorist organization but said it would be a mistake if western nations, including Britain, do not intervene on the ground as their intervention would make a difference in the final outcome.

For Hague the UK and its allies cannot afford folding hands while vast seas of Africans and Middle East populations are swelling Europe’s population with their countries feeling unsafe while ISIS is taking more disproportionate seize.

As the Syrian war is dragging on, Hague suggested that world powers should come up with new solutions including partition of the country. He argued that the borders of Syria and Iraq that were drawn by Britain and France in 1916 should not be considered immutable and that “if the leaders of either country cannot construct a state where all communities can live together, it will be right to consider international support for their partition.”

“Kurds have shown their ability to run their own affairs. A subdivided Syria might now be the only one that can be at peace,” he said.