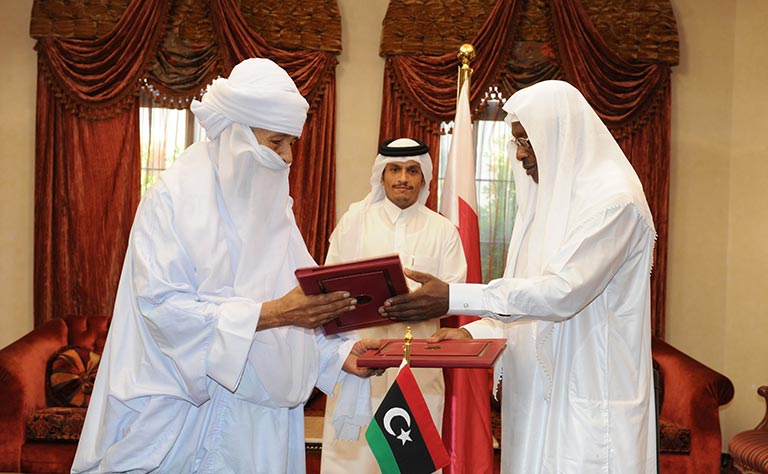 Qatar’s mediation efforts made it possible to sign a peace and reconciliation agreement between the Tebu and the Tuareg tribes that are fighting in the southern part of Libya over the control of oilfields.

The region is not controlled by the two rival governments and both tribes accuse each other of using mercenaries during clashes.

Doha hopes that the agreement will be long lasting for the clashes between the rival tribes forced thousands to flee the area and affected activities at the Sharara oil field, the country’s second largest.

The agreement was signed in Qatar and after the ceremony, Assistant Foreign Minister for International Cooperation Affairs, Sheikh Mohammed bin Abdulrahman bin Jassim Al Thani said the successful brokering of the agreement also involved the participation of neighboring Algeria and Niger even though it was a Qatari initiative.

The mediation began after the General National Congress in Tripoli requested Doha’s intervention. Shiekh Mohammed said Qatar still upholds dialogue as the most effective way to end conflicts hoping that the agreement will inspire other rival factions.

The southern town of Ubari is one of the areas where clashes have been intense but the region is expected to return to calm because all tribes and neighboring countries endorsed the agreement. In July, clashes between the two tribes reached Sebha, the biggest city in southern Libya, and efforts to negotiate a truce in September were halted because of ceasefire violations.

The agreement provides for a permanent ceasefire and the opening of public roads and an end to armed manifestations to further encourage the return of those who have fled.