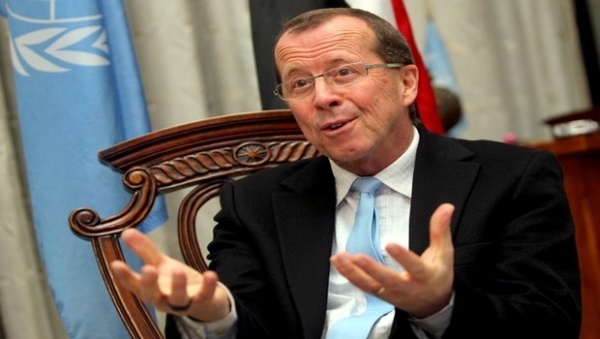 The new U.N special envoy to Libya Martin Kobler had his first official contact with the representatives of the two rival governments in Libya during the weekend to continue the U.N-led dialogue for a political agreement.

Kobler visited the Tobruk-based government Saturday before heading to Tripoli for talks with the General National Congress (GNC.)

He said under his mandate he will not reopen talks on any changes to the draft agreement but rather on the decisions to be made by the two parties so that the transitional process continues with a unity government.

In a joint press conference with the GNC deputy president Awad Abdul Saddeq, Kobler stressed that “we may need a quick round of consultations” and “push for quick decisions” to me made “but not to change the draft.”

The special envoy also met with GNC president, Nuri Abu Sahmain and stated that he was “very encouraged” with the exchanges they had.

Saddeq said airstrike operations by Tobruk forces on “revolutionaries” in Benghazi should be stopped as he accused Gneral Hafter of being behind the crimes in Benghazi and Derna.

Kobler tried to assure the two warring parties that UNSMIL is impartial in the dialogue, insisting that the political agreement drafted under Leon is not negotiable.

None of the two rival parliaments has so far voted on the draft agreement.