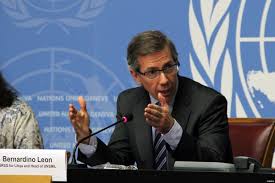 A New York Times report has raised questions about the United Arab Emirates (UAE) role in Libya as leaked emails show that the country may have been smuggling weapons there at least up to August, in violation of a U.N. arms embargo imposed since 2011 when the uprising against the Gadhafi regime began.

U.N. special envoy, Bernardino Leon, called for “a full clarification of the issue” as he is leaving the global body to head UAE’s diplomatic academy.

In one of the leaked emails dated august 4 and addressed to Lana Nusseibeh, UAE’s ambassador to the U.N., a senior UAE diplomat, Ahmed al-Qasimi, admits that the country “violated the UN Security Council Resolution on Libya and continues to do so.”

Hidden shipments to Libya were reportedly made with the participation of UAE-based Morrison Commodities company and probable cooperation of Saudi International Military Services firm.

Leon who stressed in a statement that “inaccurate or false information” have been circulating in previous months regarding the dialog process in Libya, the UN and his role called for the need to be “extremely cautious” about the latest reports. He said the allegations in the report “have not been verified.”

UAE Minister of State for Foreign Affairs Anwar Gargash underlined that the government “has consistently supported the process for peace and moderation” for the benefit of Libyans and the whole region. He said “subsequent engagement on Libya has developed as a continuation of that policy.” The official renewed UAE’s support for the U.N-led political solution.