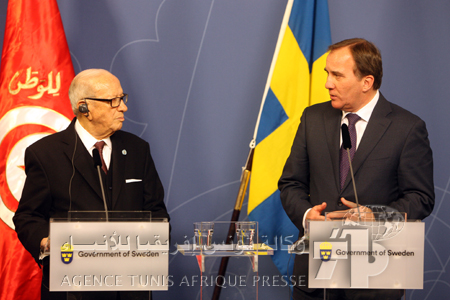 Sweden will shortly reopen its diplomatic mission in Tunis and accompany Tunisia in building its democratic process and stability, the Swedish Premier said on Thursday at a press conference with Tunisian Head of state, Caid Essebssi, in Stockholm.

Aside from the reopening of the diplomatic mission, Prime Minister Lofven also indicated that his country is ready to support Tunisia in the establishment of local democracy and back its efforts to boost trade and investment.

Also at the press conference, the two men announced the signing of a Memorandum of Understanding (MoU) meant to upgrade the two countries’ political, economic and cultural cooperation and institute regular consultations in areas of mutual interest.

Essebsi, who answered questions on the economic and security challenges facing up Tunisia, downplayed the inside crisis shaking his party Nidaa Tounes. He said the internal brawls will not affect the solidness of the party nor its progress and hoped that rival factions will soon work through a dialogue and reach comprise.

“The party remains however above any partisan consideration,” he went on saying.