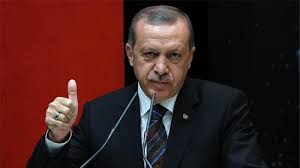 In his first speech after his party’s victory in the November 1 parliamentary elections, President Erdogan stated that they will push forward the revision of the constitution to change the presidential status from a ceremonial post to that of the head of the executive.

The opposition, which criticizes the president as being authoritarian, is worried that giving him more powers will make the country a one-man affair.

Erdogan pointed out that “solving the issue of a new constitution was one of the most important messages of November 1.” Although the ruling Justice and Development Party (AKP) won 317 of the 550 seats, it still falls short of the required 330 votes needed to approve a constitutional amendment.

A few hours before the president’s statement, his spokesman Ibrahim Kalin made it clear that it is “an issue that can be finalized after consulting with the people” stressing that a referendum will be held if necessary. “We have a clear opinion that the presidential system will help Turkey jump to another league” and will help to make the country “as effective as possible,” Erdogan’s spokesman said.

Opposition figures are wary of the move and it will be one of the key debates when parliamentary sessions begin.

Erdogan who was addressing local administrators also promised that the fight against the militants of the Kurdistan Workers Party (PKK) will continue.

He said the fight will continue until PKK’s last militant is “liquidated,” insisting that Turkey will make life unbearable to those who seek to make the same.