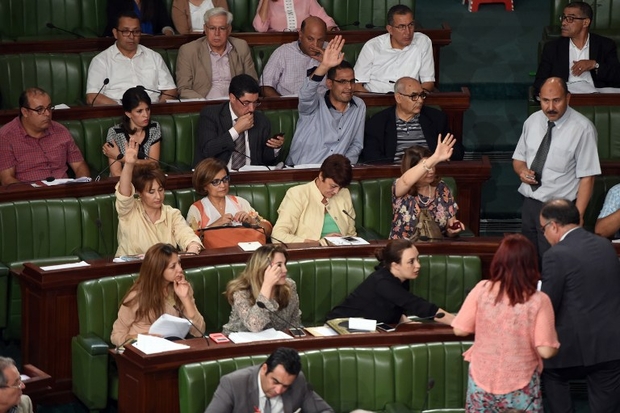 Tunisia’s ruling party Nidaa Tounes is on the brink of a split following inside-fighting between factions even though rival factions Tuesday indicated that they remain together in the single bloc.

Two different groups respectively led by the Secretary of the party Mohsen Marzouk and the president’s son Hafedh Essebsi are at odds over the party leadership and ideology.

The faction siding with Marzouk accuse President Essebsi of trying to impose a family dynasty rule in Tunisia.

Reports say armed men prevented members of Marzouk’s faction and other dissidents from attending the party’s leadership meeting last Sunday in the city of Hammamat.

Even an invitation by President Essebsi to the party lawmakers to meet at the Carthage palace apparently failed to reunite the rival parties.

However, Tuesday, both opposed factions indicated that they remain willing to stay in the single bloc party.

Hafedh Essebsi’s faction condemned, in a statement, the Sunday incident and added that in view of the seemingly division the party should quickly convene a general congress to elect a new leadership. The statement called for the mobilisation of all members and for efforts to organise the congress as wished by the founder of the party.

The statement went on calling on the rival faction to opt for unity, reconciliation and proposed that the party’s leadership meeting of last Sunday be held again on Tuesday next week in order to unite all forces and better prepare the coming congress which is due in December.

On its part, Marzouk’s faction indicated, in its statement, that it remains loyal to the party and ruled out the idea of creating a new party as suggested by some dissident lawmakers. However some members of the faction said they intend to form an independent working bloc rival to Hafedh Essebsi’s bloc.

Nidaa Tounes came to power in October last year after winning 85 out of 217 seats in parliamentary elections, to ouster the Ennahda party which came to power after the fall of former President Ben Ali.

Analysts argue that it will be difficult to cement the crack in the ruling party and that if it falls apart, its fragmentation will favor Ennahda as it will stand as the majority party in parliament with its 69 MPs.