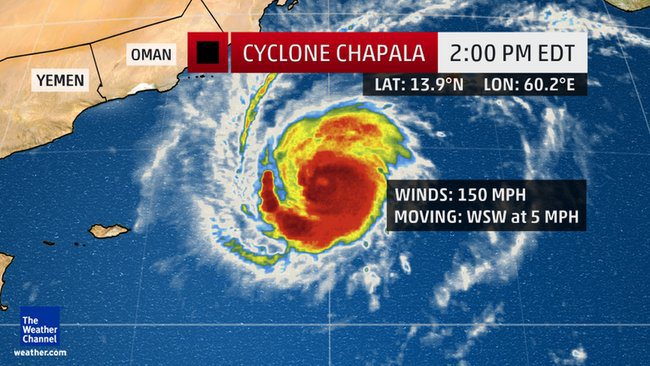 Yemen experienced a rare tropical cyclone with winds more than 100km and up to 240km per hour; making it one of the most powerful recorded storms to hit the poverty and war-ridden nation.

The cyclone baptized Chapala made landfall in the southeastern provinces of Hadramawt and Shabwa before hitting the coastal town of Balhaf, site of Yemen’s liquefied natural gas terminal, hours later.

U.N. weather agency said “the rainfall from Chapala is far beyond anything ever witnessed in this arid area which is not used to cyclones.”

Minister of Fisheries Fahd Kafain in a news conference in Saudi Arabia stated that “the damage is enormous” and fears casualties.

One of the worst hit cities is Mukalla, a provincial capital, where water levels submerged cars and forced families to flee their homes. The city is controlled by al-Qaeda since the withdrawal of the army in April. The Yemen Post reported that the city was “under water” with water levels as high as 40inches (100 cm.)

Chapala was expected to lose power by Wednesday “due to the rugged terrain of Yemen’s central highlands, dry air intrusion, increase in vertical wind shear and decrease in divergence” according to the US Navy’s Joint Typhoon Warning Centre but it can still shower parts of the country with up to 50cm (20in) of rain in two days which is 10 times the annual average.

World Health Organization (WHO) said Hadramawt and Shabwa, with their 1,8million population including more than 100,000 internally displaced and 27,000 refugees and migrants, will be severely affected.

The cyclone moved westwards away from Oman saving it from a direct hit but waves as high as three meters are expected to rock the shores of Dhofar and Al Wusta provinces.