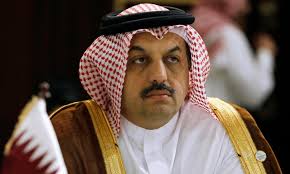 Qatari Foreign minister Khalid al-Attiyah retracted his previous statement that Qatar would send troops to Syria if necessary stressing that it “is out of the question to have our soldiers on the grounds.”

The minister who had not ruled out military intervention in an interview aired on CNN last week, insisted in his latest comments made during an al-Jazeera program, that the Syrian rebels “can liberate their country themselves.” But, he said, they need “financial support” and “people to listen to them.”

Qatar doesn’t deny that it supports the Syrian rebels and al-Attiyah went as far as guaranteeing that Ahrar al Sham does not have links with al-Qaeda and that allegations that the group had possibly perpetrated war crimes are false.

He said he would be pleased to see “Qatari-style democracy” in Syria adding that it will be “a good model” for them as he boasted that the Qataris are “happy” with “our own democracy” which has “the best healthcare system, the best education…”

Speaking about the tension between Iran and the Gulf States, the foreign minister said it should not be seen as a “Sunni-Shia” dispute but as part of efforts to avoid “an Arab-Persian conflict” as he urged Tehran to “calm down the language” in the interest of dialogue.

Al-Attiyah commented on the ongoing clashes in the West Bank between Israelis and Palestinians stating that the situation is “dangerous” and could be “the worst intifada” because the generation that is protesting knows that “there is no hope.” He urged Israel not to offend the Muslim Ummah through its actions at the al-Aqsa mosque. He added that Doha’s cooperation with Tel Aviv is unlikely without a peace process.