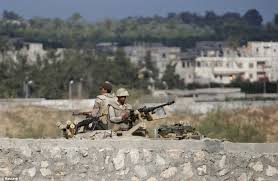 The fight against terrorism in Egypt especially in the Sinai Peninsula continues to be challenging as the government extends the decreed state of emergency for another three months in certain parts of Northern Sinai.

The state of emergency has previously been extended in January, April, and July.

Rafah, Al Arish, Sheikh Zuweid and surrounding areas are concerned by the latest extension which was announced on Wednesday but retroactively implemented on Tuesday. Nighttime curfew will also be imposed on certain parts of the restive peninsula from 5:00 p.m. to 7:00 a.m.

It has been a year now since Cairo began implementing a state of emergency in Sinai after 33 security officers were killed by militants of the Sinai Province at a checkpoint in northern Sinai in October 2014. Since then, hundreds are reported to have been killed on both sides. Last month, the military released a statement claiming that it has killed 535 militants within two weeks in the first phase of an operation that began on September 7.

Egypt has claimed that it has been making progress against extremists in the region after imposing a law that makes it a crime to make reports that contradict official statements and figures of casualties alleging that reporting high casualties of government forces could affect the country’s morale.

Elsewhere in the country, the run-off of the first round of the parliamentary elections failed to attract an impressive participation as the turnout continued to be low. It is estimated that 26% of the voters took part alongside 4.5% of the diaspora. Voting was smooth in all the 14 provinces and the second phase of the election in the remaining 13 provinces will commence in November.