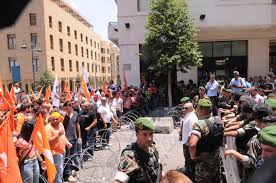 Christian politician Michel Aoun reiterated his desire to become the country’s next president during Sunday’s rally at the vacant presidential palace outside Beirut and called for the election of the president at a popular vote.

“The presidency of the republic shouldn’t be just any person who fills the post, as some people want him to be” but “it should be someone who is like you, who reflects you and who rejects oppression and stands up for your rights,” he told the rally.

The rally was called to mark the October 1990 events when the Syrian army captured Baabda and many Lebanese soldiers loyal to Aoun were killed.

Lebanon has been without a president since May 2014 and the government headed by Prime Minister Tammam Salam has been dealing with stumbling blocks during cabinet sessions as political parties that make up the coalition government continue to disagree over the proceedings of the meetings and the agenda as well as the nominations to key administrative and military posts.

The Lebanese President is elected by the Parliament. But for almost a year and a half, the Parliament members have been practicing systematic boycott of sessions.

Aoun, who is for the election of the president at a popular vote, heads the Free Patriotic Movement and enjoys the support of Hezbollah. He laments that Christians are being politically marginalized. The president should be a Maronite Christian but the continuous tug of war between rival political alliances allied to either Iran or Saudi Arabia has further complicated the situation.

The Salam Government was formed with the blessings of Tehran and Riyadh. Salam decided to suspend cabinet sessions until the parties reach an agreement in order to make meetings productive rather than tension generating.