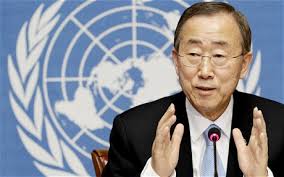 U.N Secretary General Ban Ki-moon has warned that the peace and stability of Lebanon are threatened by the Lebanese factions participating in foreign wars in the Middle East.

In a report to the Security Council on the implementation of UN Resolution 1559, Ban Ki-moon underlined that the involvement of Hizbollah and other Lebanese fighters in the war in Syria is endangering their country.

“The involvement of Hezbollah and other Lebanese factions in the fighting in Syria seriously destabilizes the security and stability of Lebanon,” he said.

Ban also said that the participation of Lebanese nationals in the conflict in Syria is in violation of Lebanon’s dissociation policy.

The U.N. chief urged the Lebanese government and the army to take the necessary measures to stop Hizbollah and other armed groups from possessing weapons in violation of Resolution 1559.

Hizbollah has reportedly dispatched between 5,000 and 8,000 fighters to Syria to help President Bashar al Assad’s regime and is said to have also fighters in Iraq and Yemen.

Hezbollah is a politico-military party and the report by the U.N Secretary General stressed that the “only legitimate institution in charge of defending Lebanon’s sovereignty and territorial integrity” is the Lebanese military.

Ban ki-moon’s fears of Hezbollah intervening in Iraq could be justified as the party’s leader Nasrallah holds Saudi Arabia responsible for all the bloodshed in Iraq since 2003. He has also been very critical of Riyadh’s role in Yemen and in the July 2006 war with Israel. Hezbollah has close ties with Iran.

Lebanon’s sectarian and religious differences have weakened the political arena and hampered the election of a President by the Parliament since May 2014.