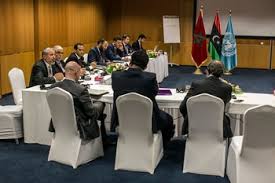 Talks to end the Libyan war and the hostilities between the two rival governments began in Morocco on Monday with the hope that an agreement will be reached by October 20, before the mandate of the Tobruk-based parliament expires, although the latter decided to extend its mandate until elections are organized. The spokesman of the U.N mission to Libya said special envoy Bernardino Leon is “meeting a number of negotiators.”

A source close to the negotiations stated that discussions are focused on the names of the proposed candidates to form the unity government. At the end of the last round of negotiations on September 22, a final draft of the political agreement was given to the delegates of the two governments with Leon stressing that there will be no more amendments.

The Tripoli-based General National Congress (GNC) and the Tobruk-based House of the Representatives (HoR) were urged by UN Secretary General Ban Ki-moon to reach an agreement in order to end the chaos in Libya during a high level meeting on the country’s crisis last week at the UN headquarters.

Hardliners of the rival governments continue to be sensitive to a power sharing agreement under a transitional unity government and the decision of the internationally recognized parliament to extend its mandate with only a couple of weeks left before it ends could affect the talks.

HoR members say the parliament will continue to be active until a new legitimate body is elected. The extension signals that the parliament could stay in power until the environment in Libya is conducive for elections. The last parliamentary elections were not held nationwide because of the intense violence in some areas.