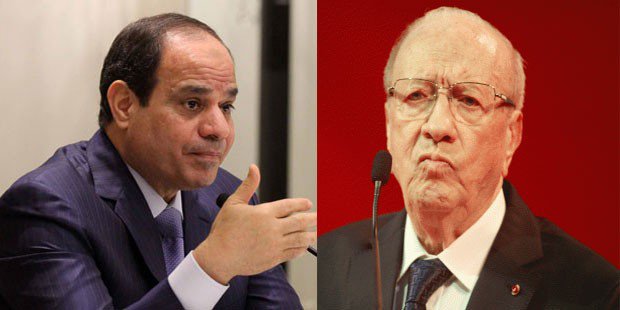 Al-Sissi who was receiving his Tunisian counterpart Caid Essebsi condemned terrorist attacks that have engulfed both countries and the entire region. He called for increased support to counter-terrorism efforts being made by victim countries and for the promotion of a religious discourse that highlights the tolerance and true values of Islam.

“The spread of terrorism and extremism are now threatening the national security of our country and the stability of the region,” al-Sissi said.

The two Presidents hailed the outcome of the 15th meeting of the Egyptian-Tunisian Higher Committee convened in September, after five years of inactivity. The meeting highlighted by the signing of 16 memoranda of understanding (MoUs) in many fields including trade, industry, health, investment.

Both presidents also expressed their common view on regional conflicts stirring the Arab world. They condemned Israel for violating the Aqsa mosque Muslim sanctuary in Jerusalem which sparked further tension between Israel and the Arab world. Both leaders added that such a violation pits the region into further “instability.”

They also threw support behind the self-determination of their Palestinian brothers and their statehood struggle.

The Syrian crisis was also addressed as the two leaders called for political settlement of the four-year crisis while they also called on Libyan rival parties to endorse the UN document initialed in July in order to end the long and exhausting conflict which has had a toll on the security situation of the two countries laying at opposite sides of Libya.