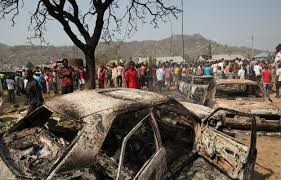 Boko Haram has killed 3,500 civilians in Nigeria and bordering countries this year even as a regional offensive has driven the Islamist militants from large tracts of territory, the London-based human rights group, Amnesty International said on Wednesday.

According to the International NGO, the Nigerian-based terrorist group had claimed the lives of at least 1,600 people since the start of June.

“The number of people killed so far this year is truly shocking with more than 3,500 civilian fatalities in less than 300 days,” said Netsanet Belay, Amnesty International’s Africa Director for Research and Advocacy.

“Governments in affected countries must take all necessary legal measures to ensure the security of civilians in affected areas,” the statement added.

Nigeria’s army in particular has claimed significant gains, destroying rebel camps in the northeast, arresting alleged commanders and freeing hundreds of women and children apparently held by the group.

Nigerian President Muhammadu Buhari, who came to power in May, has ordered security forces to put an end to Boko Haram’s six-year insurgency by year-end.

The troops are backed by a multinational force combining soldiers from Cameroon, Chad and Niger – nations that have faced attacks by Islamist fighters. Benin has also promised to send troops.

London-based Amnesty has previously called for more to be done to protect civilians in the conflict, which since 2009 has killed at least 17,000 and left more than two million homeless, mainly in Nigeria.