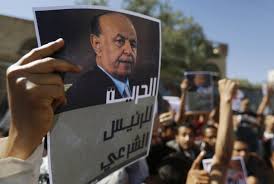 President Hadi arrived in Aden on Tuesday marking the end of his exiled government’s efforts to return back to Yemen with the help of the Saudi-led coalition and pro-government militias.

The unannounced arrival witnessed armored vehicles positioned around the airport and security checkpoints in the city.

A statement by Hadi’s office said the President’s return ends his six month absence from the country due to the “brutal aggression which has been carried out by the militias loyal to the Houthis and Saleh on the city of Aden.” His stay is expected to be short because he will be heading to the U.N General Assembly after the Eid celebrations on Thursday and the commemoration of the Revolution Day on September 26.

Fighting is still going on and U.N Secretary General Ban Ki-moon called on warring parties in Yemen to “take all feasible precautions to avoid loss of civilian life and damage to civilian objects” and showed concern for the “escalating ground fighting and air strikes” that are increasing civilian casualties.

Hadi’s arrival in Aden a week after his Prime Minister together with seven ministers returned to the city shows that the coalition forces are gaining and maintaining their grounds in the Yemeni war. However, residents of the city have raised their eyebrows over the presence of jihadists linked to al-Qaeda and the Islamic State parading freely in the streets. The slow restoration of public services and utilities were also issues of concern but the United Arab Emirates is helping to solve them by providing funds and paying the salaries of the workers.

The president is expected to meet members of the cabinet, local officials and military and security leaders in the coming days.