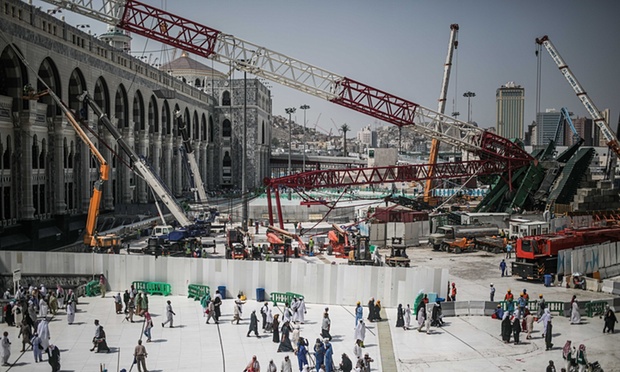 A Royal decree from King Salman of Saudi Arabia has imposed a travel ban on the executives of the Saudi Binladin Group (SBG) and ordered a compensation fee of 1million riyals ($267,000) be paid to the relatives of those killed and to those permanently injured in last Friday crane accident.

Other injured persons were to receive half that amount. Investigations into the crane fall on a part of the Sacred Mosque in Mecca are still ongoing and a full report is expected on Friday.

State-run Saudi Press Agency reported that SBG “was in part responsible” for the crane’s fall because it was left “in a wrong position” during the thunderstorm and “the rule of safety” was not “respected” as the main arm was not lowered citing the report.

It added that the firm failed to coordinate with metrological officials and “the position of the crane was in violation of operating instructions prepared by the [German] manufacturer.”

At least 107 people were killed and around 400 injured after the crane was toppled by the strong wind. Saudis, Iranians, Nigerians, Malaysians, Indonesians and Indians were among those killed.

SBG has been excluded from bidding for new public projects until after the investigations with possible legal actions lingering.

SBG is participating in the Holy mosque’s expansion project which is worth $27 billion. Upon completion, the mosque can accommodate up to 2.2 million persons during prayers.

The accident is not expected to affect the annual Hajj but the old and strong ties between SBG and the Royal Palace could be shivered.